Sunday was fun-filled. It was a beautiful warm and windless day. After receiving a lovely card from daughter, plus chocolates (she does know me after all these years!) I took the first morning swim I have had for a number of weeks, as my lingering cold has made it seem a bad idea. Then the pooch pack and I went to the beach. R decided not to come but regretted it when I told her I had met a neighbour, plus little daughter who is a school friend of hers, there. 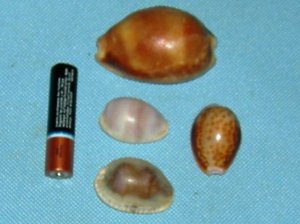 The shell-ection was very poor until I suddenly came upon this cowrie – it can be seen that by comparison with others of a more normal size I have found lately it is a lovely large specimen.

After my return we set out for Rocky Bay on the South Coast, where the two fathers were stood lunch at the Wrecked Heron. It gets the name from the Knysna-built boat rescued from rotting away on Durban Bay and now ashore as a bar built into the restaurant.

We had a table right at the window overlooking the sea, and could step out of the low window to get to the beach. A pleasant meal, indeed.

After lunch there was some excitement evidenced, and it transpired that the fisherman on the extreme right had a ray on his line.

A ray on the line!

It was giving him a good fight, and although he beached it for long enough for me to take this picture and identify it as, I think, a spotted eagle ray (Aetobatus narinari) the next wave took it out again and he was still fighting it when we left.

I gathered (and hope) that it was his intention to release it again after having proved the catch. A beautiful creature, although I would hate to be stung by one and scoot if I see them in the same patch of water as I happen to be messing about in.