(*wail* Lost server from afternoon right through until 01h40 – seriously behind!) 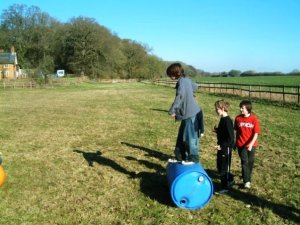 Grandson over a barrel
(at home with friends)

GCSE (General Certificate of Secondary Education) results were received by high school pupils today.  Grandson (I only have one of those, as against three granddaughters) can be rather proud of his results:

English Language  A*
English Literature  A*
History  A*
Religious Education  A* (More like Philosophy; there were two papers and his marks were 100% and 97%.)
Music  A
Latin Literature  A
Latin Language  B
Natural Science  B (Physics  B, Chemistry  B, and Biology  B.)
Mathematics  B
German  C (Over 60% apparently failed this paper.)

Not surprisingly, he is planning to take English and Philosophy in college!

The grandson has had lots of fun
In his GCSE,
We didn’t know he’d be a one
To do so brilliantly;
Computer games he played a lot,
In animations, knew what’s what,
But good at waking up, was not –
When sleeping, leave him be!

It didn’t seem that he would try
To match his sister’s fame;
When she was at the books, you’d spy
Him deep within a game
Or fast asleep, but suddenly
Ambition struck, and now we see
That he has done amazingly
To also make his name!

Of course, I take some credit for
His English language skill:
My books he said he did adore,
And read them with a will,
And even praised the very ones
Bestrewn with Really Awful Puns –
The ones that every purist shuns –
I hope he reads them still!

24 Responses to Another grandkid brag