(Boxing Day 1974 saw Much Better Half and I setting off on ‘Rideabout’ in our Combi Camper ‘Cambi’ with our daughters aged 4 & 7. After overnighting behind a bogged-down Rolls Royce near Golden Gate we went on to Kimberley’s Big Hole, and spent that night in the middle of nowhere beyond Griekwastad. On the Saturday we went on to Upington, camped on the island there in the Orange River, and were adopted by a scraggy ginger cat we named as captioned, or just ‘Fizzy’.)

When we did get up, I put up our beach umbrella on the bank of the river while MBH prepared breakfast; then she and kids went to swim and laze while I repaired a suitcase with a fascinated Ginger as audience. In due course he and I joined the family, and I had some lovely swims and sunbathing. Ginger ‘did his thing’ round us, but was never far away. After all this activity we felt like having eighty winks, so after a scratch lunch we had them, cat included. At 4 p.m. we woke and went for yet another swim and laze (cat not included in the former).

‘We must surely have saved enough from our budget for a hotel-break tonight.’ MBH declared. ‘Who knows when we’ll get the next chance?’ 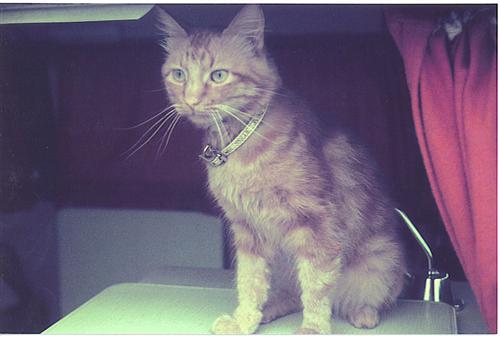 So we prepared to set off, while Ginger sat watching us from his sink/fridge- top. Efforts to ‘shoosh‘ him outside were met with indignant fizzes. ‘Leave the sliding door open for a sec,’ I suggested. ‘He’ll scoot as soon as we start moving.’

I started to pull off. Ginger gave a sigh of pure bliss, and curled up on his ‘spot’. He continued to snooze quite happily in spite of the fact that our subsequent trip was a very stop-start affair while we asked all over the campsite for anyone who knew anything about the cat. Nobody admitted to having ever seen him before. Finally, in desperation, we enquired the whereabouts of the local SPCA or its equivalent. There wasn’t one. Ginger stayed put, and we set off for the hotel.

This was a lovely white one which became the standard of comfort for the kids for years after. ‘Want a white hotel,’ YD would demand.

We booked in for dinner, bed and breakfast at a dent of R20.25 in our ‘savings’ from our daily allocation. Then we went shopping on Ginger’s behalf – a stock of pilchards and a sand-box. He seemed quite happy to remain in Cambi while we gorged ourselves on an excellent dinner and then took a stroll round the metropolis’s shopping area. Even at a leisurely pace, that didn’t take long.

I gave Ginger a good walk in the environs of the hotel before shutting him into Cambi and retiring at 11:30 p.m.