Here be crocs and hippo

The pictures in my previous post were, in fact, taken at St Lucia Estuary and Mfolozi Game Reserve respectively.  We had an opportunity to spend a couple of nights at St Lucia village, and travelled there on Friday.  St Lucia Park is Africa’s oldest Reserve (1897) and the estuary is Africa’s major prawn and fish breeding ground – I’ll give you good rhyme or reason below! 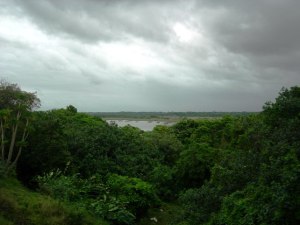 After arrival at one of the many cabana complexes lining the shores, I was disappointed to find that ours – and, in fact, most – only gave limited glimpses of the water.

I set off to find (a) an opening somewhere along the stretch where one can reach the forest area between the dwellings and the reeds, and (b) a route through the forest which would take me to the edge of the lake.  After a great deal of scrambling – being careful to look out for any local inhabitants who might want to use teeth or claws on me – I finally found my way to the edge for that top photo.  That water is home to some 1200 hippo, over 2000 crocodiles and – believe it or not – numerous sharks.

The following day we booked an excursion on a crowded boat where the open top deck part was all that was available.  Great – except that rain was threatening and in due course carried out the threat.  The kids and ladies all found space below, but Sn-i-L and I stuck it out.  Getting a bit soggy was worth it.  We had great views of some waterbuck, fish eagles, a distant croc, and a giant kingfisher. 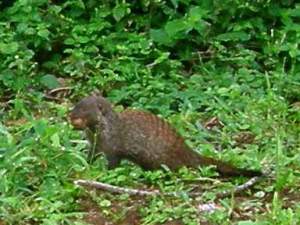 Banded Mongoose near our cabana.

The diversity of flora and fauna is nothing short of astonishing.

We also came across two really good pods of hippo.

Hippo poo
Is good for you
It comes in tons and tons,
Though, eat poo, few
Would want to do
The fish and prawns are ones,
When hippos do a number two,
Arrive to be the creatures who
Will go at it great guns!
So though the lake is one great loo,
The humans get their food there, too,
From hippo with the runs.

Weighing up to two tons, they can graze up to 68Kgs in a night, and move up to 10 Kms to do it.  When changing grazing grounds, they have been known to travel up to 30 Kms at a time.

Tooth is stronger than friction – hippo teeth are denser than elephant ivory and are really heavy to hold. No wonder hippo are such killers.

What a hippopotamus will lake more than a river bed for his day’s sleep. 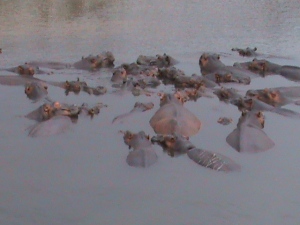 We paid a visit to a cheese farm that afternoon with goats and moos and geese and chickens to delight the kids.

Then, the following day, we drove back via a visit to Mfolozi Game Reserve.  We saw impala, distant giraffes and rhino, vultures, the rump of an elephant (‘He’s got big privates!’ remarked young 2 ½ -yr-old J) and then came across this gentleman feeding his face right next to the road. 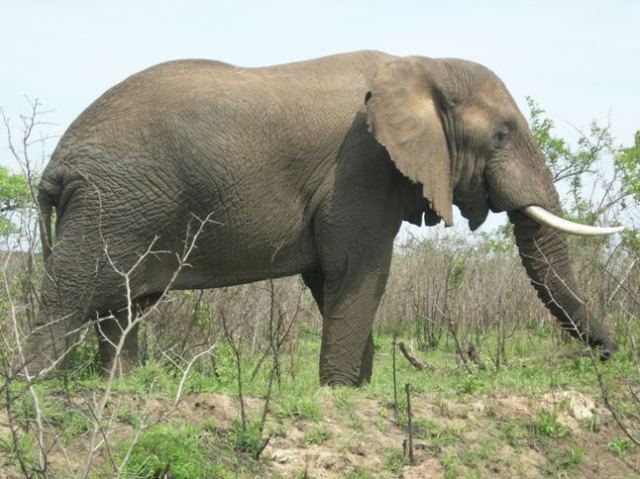 Even two excited children being subdued didn’t make him miss a single beat in his chomping.

That was the final bonus of the excursion.