With Ailsa’s Travel Theme currently carved in stone, I was cursing I didn’t notice it when doing the Ginger William post below, featuring Mukurob – the Finger of God.  Too good to miss, though, and there is one picture in my 1975 series which I didn’t post and can put here specially. 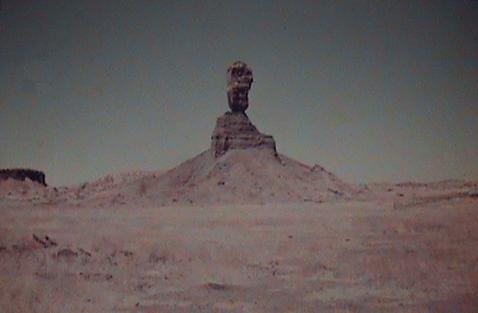 The Finger Rock was rude to point
Straight up at Heaven’s bowl –
With Nature’s nose put out of joint,
She made it rock – and roll!

‘Mukurob consisted mostly of sandstone. The structure was 12 m high and up to 4.5 m wide, and weighed some 450 tons. What made Mukorob so special, however, was its base. Just 3 m long and 1.5 m wide, it was narrower than the mass of rock which it supported.

‘Mukurob was once part of the Weissrand Plateau before 50,000 years of erosion slowly isolated the structure from the rest of the plateau.

‘Mukurob was known to the Nama people for generations and inspired many tales and legends; the following legend explains the structure’s name and was told in many versions: “The Herero people had been at odds with the Nama people since time immemorial. One day a large group of Herero and their well-fed cattle came from the grazing areas in central Namibia to the Nama region in the arid south. “Look here, how rich we are, with our nice fat cattle”, they boasted. “And what have you got? Nothing but rocks!” they mocked. The quick-witted Nama, however, replied: “We have this very special rock. You may own as many heads of cattle as you want – we are the lords of the country as long as this rock stands here.” This annoyed the Herero and they decided to topple the rock. They tied many thongs into a long rope, wound it around the rock and hitched up their cattle. But hard as they tried, they were not able to topple the rock. “Mû kho ro!” the Nama shouted – “There you see”!

‘Nama oral tradition also related that the power of the “white man” would end when this geological structure collapsed.  South Africa finally relinquished control of (then) South West Africa a few weeks later when South Africa, Angola and Cuba signed the “New York Treaty” (or “Tripartite Agreement”) at UN Headquarters, which finalised the agreements reached earlier in Geneva. Angola and Cuba also signed a bilateral agreement on the Cuban troop withdrawal from Angola, which paved the way for Security Council Resolution 435 to be implemented on 1 April 1989. On 21 March 1990, Namibia gained independence from South Africa. However, it is not known whether this “legend” was fabricated after Mukurob collapsed or not.’