As I normally do (with permission) for KickstArt stage productions, I present the view of the stage before the curtain goes up – except that in this case there wasn’t one and it didn’t. The ‘Snoopy’ sign did the rising before business commenced. 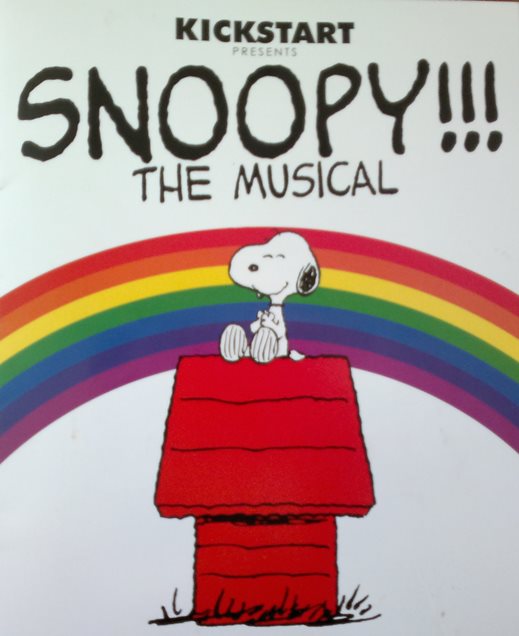 The ‘Peanuts’ comic strip first started delighting the public in 1950, and Snoopy appeared in it on October 4th, only two days after the very first. The adaptation of Schultz’s strip to the stage show ‘Snoopy!!! The Musical’ first appeared in California in 1975, appeared Off-Broadway and in Canada in 1982, at the West End in 1983, and after various revivals reached London in 2004.

One should not expect a story line or theme – this “series of self-contained vignettes” is akin to a binge of reading a string of Peanuts comic strips one after the other. Except, of course, that here the characters move, sing, dance, and appear in greater numbers together than a strip usually fits in. The one thing that does progress is Snoopy, becoming less like a dog and more like a cat as he goes through rebellious and creative phases.

Steven Stead has vacated half his director’s chair to become Snoopy – sharing with Charon Williams-Ros – Bryan Hiles is the slouching, self-deprecating Charlie Brown, Carol Trench is the insensitive Lucy, Katy Moore is Sally, Caitlin Kilburn does Peppermint Patty, Graeme Wicks is the blanket-addicted Linus, Evashnee Pillay flutters around as Woodstock, while Justin Southey and Bruce Baker provide the (all) live musical accompaniment (note microphones sticking out at the back).

The musical pre-dates by far the assassination of Martin Luther King in 1968, and therefore the introduction of Franklin to the Peanut Gallery. An article appeared (coincidentally enough) in this week’s Sunday Tribune on how after the assassination a retired teacher, Harriet Glickman, wrote to various cartoon-strip writers of the time asking them to include black characters. Most were afraid of being dropped by their syndicates, but Schultz demurred mainly on the grounds that his interpretation might be construed as unintentionally condescending. When Harriet inspired two mothers of African ethnicity also to write to him, he complied. Apparently his syndicate boss did say, ‘Are you sure you want to do this?’ His response was, ‘Either you run it the way I drew it, or I quit.’ End of argument. At that point Peanuts was already read and loved by tens of millions.

Maybe it is time for Franklin to be inserted into The Musical as well?

Anyway, on with the show. It was great fun of the kind that one starts appreciating almost more after the event, when recalling scene after scene, than during it. Writers will all love the part where Snoopy commences his book, agonising on the first word, and triumphantly deciding to follow his first ‘I’ with a ‘t’. (Digressing; although that opening, ‘It was a dark and stormy night’ has been ridiculed and lampooned for decades, I personally regard it as a gripping and effective way of setting his scene.) Anyway, budding authors can certainly learn from the unfailing optimism with which Snoopy greets rejection letters far more brutal than any a person is actually likely to receive.

The songs are delightful, and in fact one of them is already well-known to local audiences as having become almost a theme-tune for KickstArt, and particularly their pantomimes. I must include the video of this one, albeit with the cartoon characters:

Kids should love songs like this.  They may find some of the probing into human nature a bit above their heads, but will certainly enjoy many parts including a ‘horror’ scene which incorporates a typical Greg King refinement to add to the deceptively simple stage set he constructed.

Conclusion: although the applause was certainly enthusiastic, this opening night did not give rise to quite the hysterically rapturous reception of a couple of previous ones, but the show has qualities which may well linger on after memories of the others have faded.

Active septic geranium who plays with words writing fantasy novels and professionally editing, with notes writing classical music, and with riding a mountain bike, horses and dinghies. Recently Indie Publishing has been added to this list.
View all posts by colonialist →
This entry was posted in Art, Dogs, Theatre Review and tagged Colonialist, Peanuts, Schultz and Franklin in Peanuts, Snoopy!!! The Musical, strip tease musical. Bookmark the permalink.