Robert Hart (1777 – 1867), argued as having been the first English-speaking South African – a direct ancestor.

Why, since inception, have I deliberately used a blog identity which has become increasingly controversial and in some (ignorant) circles is regarded as being akin to ‘racist’?

I do it out of pride in my background.

Note that the meanings I ascribe to ‘colonist’ and ‘colonialist’ are the simple and clear-cut ones – the former denotes one of the original group or individuals who colonise a country, while the latter is a colonial resident and/or a proponent of colonists and colonialism.

My ancestors go back to any number of colonists and colonialists both, almost to the days of the first Dutch arrivals. In historical perspective, the actions of colonists in moving to countries like Africa, America or Australia were an inevitable part of the development of all of these places. With the benefit of modern thinking, one may well condemn many of the methods used to subdue and subjugate local populations; however if all of those now wailing in horror at the thought of it were to be translated back in time and circumstances they would behave no differently.

What I choose to admire and celebrate is the wealth of achievement of this group of people, no less my own direct ancestors. Often arriving with hardly any possessions, and faced with primitive conditions and incredible hardships, they used courage, enterprise and hard work to carve out a place for themselves, their descendants, and all inhabitants. Everyone living in former colonies who now enjoys the benefits of modern living, whatever race, colour, creed or persuasion they may be, undoubtedly owes a debt of gratitude to such ‘settlers’ and their offspring. Empty and populist rhetoric would have it otherwise, but such talk is aimed at those who allow emotion and myth to override logical thought.

This WP blog was opened to run concurrently with my first one, started in 2007 with 24.Com which became Letterdash, after the writing on the wall showed that the first platform was terminally ill (RIP).  That blog was titled ‘Settler’s Perspective’ and ‘Colonialist’ was my avatar.  My meerkat picture was carried over from that, and I have never felt the urge to change it. 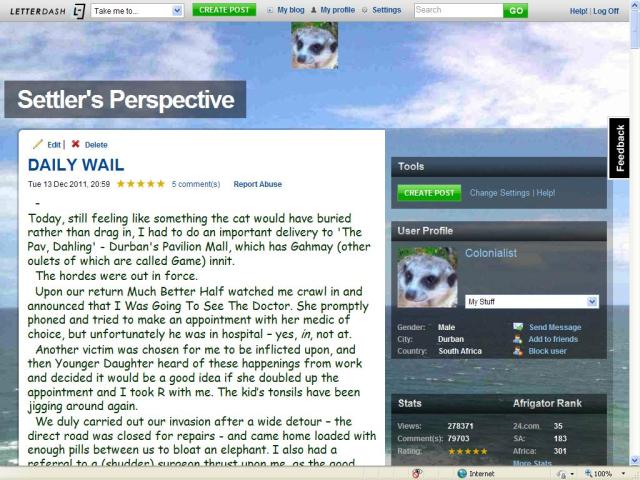 Active septic geranium who plays with words writing fantasy novels and professionally editing, with notes writing classical music, and with riding a mountain bike, horses and dinghies. Recently Indie Publishing has been added to this list.
View all posts by colonialist →
This entry was posted in Africa, Colonialist, History, Personal Journal and tagged Colonialist, Colonies and History, Colonist and Colonialist, Robert Hart, Why Colonialist Blog. Bookmark the permalink.

38 Responses to Why Colonialist?