‘If only …’ is one of the most heart-wrenching ways to begin a phrase after a tragic event.  ‘If only I had checked all seat belts were on …’,  ‘If only a doctor had been consulted sooner …’, ‘If only I had shown how much I cared …’; or, ‘If only we had left a minute earlier or later …’, ‘If only I had known then what I know now …’, ‘If only he had never even started’.  The first group might have some benefit for future behaviour; the second are exercises in futility — but one can’t help indulging in such exercises, anyway. 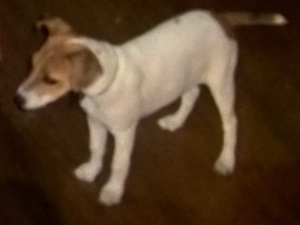 A case in point is next-door neighbour’s dog, Zippo, who was the apple of her recently departed husband’s eye and her solace after she recently lost her mother as well. The little Jack Russell would bark incessantly for hours if she went out, though her other two dogs were content in one another’s company. After successful experiments, on the many occasions she came over for a meal or visit she took to bringing Zippy with her. She soon learnt to get on with our own cats and dogs, and in due course even the kittens grew big enough to teach her respect and no longer had to be confined to the bedroom during visits.

This developed to a point that if the neighbour went out elsewhere and wasn’t going to be back too late we invited her to deposit Zippy with us.  The problem was when she was going to return late, or when we were out. Zip found ways of getting under, over or through various places and would arrive in our grounds without being able to get back. We started calling her Houdini Hound.

We found, and I blocked, these places one by one.  The latest was high up a wall and my blocking left a tiny gap between a pillar and slats, obviously too small for her to get through.

Last week the neighbour was called away on an emergency and we heard Zip yapping incessantly close to our fence.  Then she stopped.  A bit later we got a call from the now returned neighbour — no sign of Zip.  We searched our grounds, and then I went up and down the street on foot while the neighbour on the other side, whom I had met and told about it, set off to range further on his motorbike.  We returned simultaneously from opposite directions just in time to hear Zippy’s owner screaming and crying hysterically.  She let us in and pointed to the side of the house, where we found the poor little dog hanging with her neck caught firmly in that tiny gap I had left, bleeding profusely. 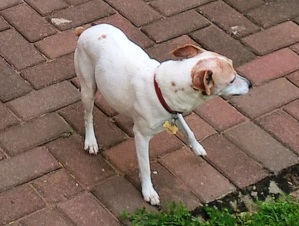 It took the teamed efforts of both of us to free her, and Younger Daughter and Much Better Half phoned frantically to find an emergency vet.  The only one available was on the far side of Durban. MBH stayed with the kids, and neighbour was too distraught to accompany us. I held Zippy and stroked and kept her warm while YD drove — what a time for the satellite navigator to lose signal every few minutes!   Finally we had to get directions from a petrol station.

The vet was ready and waiting. Alas, dear Zip’s injuries were too severe, and taking into account that she was fifteen years old, the kindest thing was euthanasia.  We were devastated — it was almost like losing one of our own ‘family’.  YD wept, and I suddenly got some dust in my eyes.

Later came the ‘if onlies’.  If only I had closed that small gap, impossibly high and small though it was. If only we had gone over and taken her after she started yapping. If only we had searched her own grounds first.  If only we had investigated as soon as she stopped barking.  If only, hurried though her departure had been, neighbour had left the dog with us; or if only we had given up and left Zip’s private one-way route open.

Finally, I pointed out how futile these regrets were. Everyone agreed … but then started again. As I have said, it is hard not to.

Active septic geranium who plays with words writing fantasy novels and professionally editing, with notes writing classical music, and with riding a mountain bike, horses and dinghies. Recently Indie Publishing has been added to this list.
View all posts by colonialist →
This entry was posted in Dogs, Personal Journal, pets, Philosophy and tagged Colonialist, houdini hound, if only, regrets. Bookmark the permalink.