A stroll in a tiny garden …

‘Benvie’ is a garden in the KwaZulu Natal Midlands, at Karkloof some 15 Km beyond Howick, which was established in 1882 by a Scottish immigrant cabinet maker, John Geekie. Naturally (haha) his interest was mainly in trees, and there are some really old conifers and eucalypts.  Some of the latter (mountain ash) have a circumference of some seven metres.  However, his garden allowed space for sweeping lawns, and vivid colour is added by, mainly, rhododendrons and azaleas.  There are also water features and a stream, and birds abound.

You might imagine that this would have taken some space, and probably expect a couple of acres, or a hectare? Actually, the garden occupies some 30 hectares, or 74 acres! The ‘stroll’ on the main path open to visitors is about two kilometres long.  Arrangements to view can be made with John Geekie’s great granddaughter, in residence.

Our visit just over a week ago was part of my birthday celebration, and we started with lunch at Yellowwood Café just outside Howick, which has a distant view of Howick Falls, boasts farm animals including a miniature horse  (a pig bit young R, but she was careless)

as well as some buck which had left the scene before I got my camera ready, and donkeys in football jerseys.

On to a small selection of the pictures I took of  the garden: 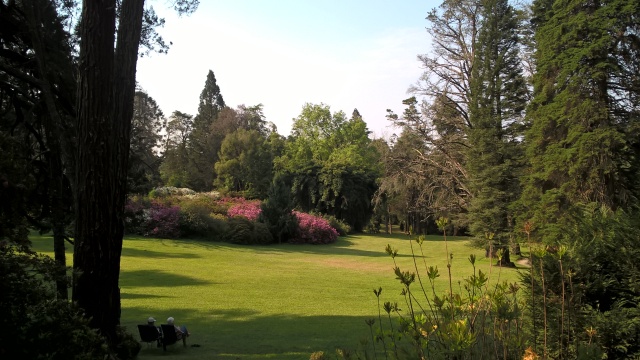 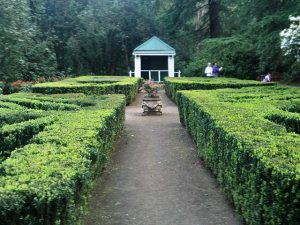 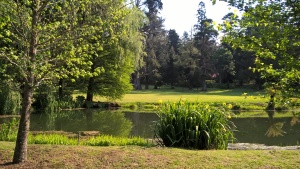 Finally, we returned via a stop for afternoon tea at The Farmer’s Daughter on the outskirts of Howick which boasts this view of a branch of the gorge into which the falls plunge.

22 Responses to A stroll in a tiny garden …