Overheard in a Secret Meeting …

A: Well, you’re stuck with him now.

Z: No, I’m not. Get your people working on digging up some dirt on him.

A: We’ve had a look, but there isn’t anything, really. No bribes, no corruption, no extravagances …

Z: There’s got to be something! What about that nasty unit he set up in Revenue Service that had us all so scared?

A: I don’t know if that was exactly illegal.

Z: Well, dig through the laws until you find something to make it that way. Come on, man, if you search properly you can even find a section or two to make blowing your nose illegal. And what about that guy who went on pension and came back as a consultant? Aren’t there any clauses anywhere that would make that do?

Z: And whatever they come up with, you and I will have had nothing to do with it, understand?

Following on public perception that a conversation on these lines must have occurred, Zapiro published this cartoon. 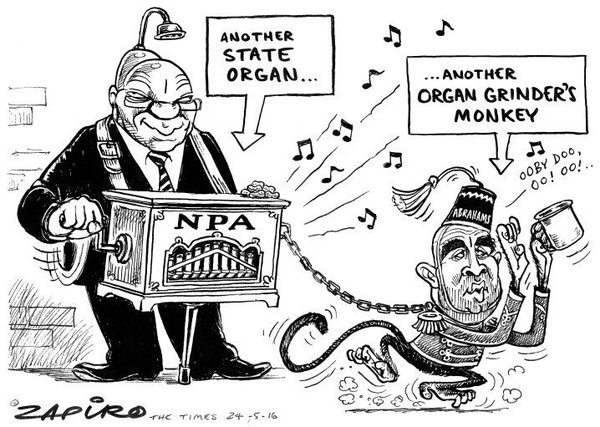 Immediately there was outrage — not that the Public Prosecuting Authority’s head honcho was depicted as a puppet, but that the form taken was to show him as an organ-grinder’s monkey. This immediately made it racist. For crying in a bucket! People of all sizes, shapes, colours, races and religions are referred to as monkeys when they are seen to behave as such, and the one belonging to the organ-grinder is an old established stereotype. Are we to assume that if the cartoon had shown a puppet instead, it wouldn’t have been racist? And if it was racist, why wasn’t the President shown as a monkey? Objectors are being ridiculous, and Zapiro should never have conceded that there was anything anyone but a total idiot would regard as racist in his clever cartoon.

Anyway, I feel a Really Awful Rhyme coming on …

Our President, at any cost,
Must stay in office or be lost,
For, should his term of office fail,
Then he might serve a term in jail?

He dodges this with dizzy swerves —
Though it’s no more than he deserves —
Most definitely, he would fain
Remain upon his gravy-train.

Alternative, with half a brain,
Is seen as going down the drain,
So he must find a handy thug
To scrub the pulling of the plug.

The wrecked economy you see
Is due to dictum, ‘Me, me, me!’
‘It’s for the Party,’ each declares,
But parties funded — are all theirs.

For parties and a spending spree
From taxes paid they get for free,
But when it comes to fixing stuff
They say the funds are not enough.

So if illicit cash you crave,
But aren’t particularly brave,
Ensure jail-time is never spent —
Just be elected President!