Posted on December 9, 2016 by colonialist 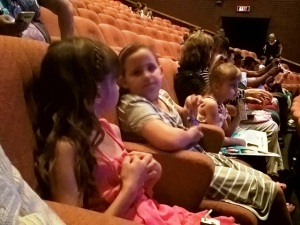 We got in early, before the packed house got the packers in.

WP appears to have got over its sulks, so this time the pasting happened. Here is what should have appeared in the previous post:

Last evening the entire family, plus a friend of R with her mother, saw KickstArt’s latest Panto.

The verdict from all ages can be summed up in a word: stunning.

Previous multiple-award-winning productions have been outstanding, and how can it be possible to move up a gear from that? Yet they consistently achieve it.

Sets, and costumes were amazing and the puppets and special effects mind-boggling. The acting, singing and dancing were superb and it is really difficult to pick anyone out for special mention. However, Katy Moore as the ever-so-evil witch Maleficent does deserve to be. She is delightfully nasty and scary. More stage time is given to this character than is usual, because in this production one of her spells gone awry sees her as a new kitchen maid at the castle. Her constant expression of disgust and disdain with jollity going on all around her must be extremely difficult to maintain, but maintain it she does. In spite of being such an effective nasty she manages to attract some sympathy for having been shunned, and I am sure the kids are relieved that her sticky end, after being defeated, is to mix sticky things in the kitchen — which she has come to enjoy doing.

The sets and some of the music have a Frozen theme, which the kids loved. Topical jokes and references geared to appeal to the various age groups are scattered freely, and the normal Panto encouragement of audience participation manages to seem fresh even though on the well-worn theme

In this production, the Handsome Prince is an existing flame who falls asleep with the rest. The version I am more familiar with has him as a several-generations-later character who does an amazingly fast job of falling in love. I can’t make up my mind whether I prefer the more credible version in this show or find the fresh suitor more romantic.

Anyway, a Who’s Who. To quote from the KickstArt website:

“…It stars Haylea Hounsom as Princess Rose, with Lyle Buxton as her handsome prince, Robin. Carol Trench makes another rare and very welcome return to the Durban stage to play her hilarious and anxiety-ridden mother, Queen Dot, and Peter Court plays her lugubrious, hard of hearing father, King Frotho the Frosty. Darren King and Graeme Wiks provide masses of humour as Nurse Nora Knickersnagger* and Huckleby Hopscotch the Court Jester, and Bryan Hiles reaches new levels of charming silliness as the cowardly knight, Sir Ninnyliver. The magical forces of good and evil are splendidly represented by the effervescent Belinda Henwood as Celestina Sparkle, and Katy Moore as the deliciously evil Maleficent  … directed by Steven Stead, with musical direction by Evan Roberts, set and costume designs by Greg King, and lighting by Tina le Roux … runs from 2 Dec to 8 Jan.

Next week we are all going to catch the West End, London, production of “Wicked”. It will be interesting to see if they can conjure up as much magic as this show on our doorstep has done.

Active septic geranium who plays with words writing fantasy novels and professionally editing, with notes writing classical music, and with riding a mountain bike, horses and dinghies. Recently Indie Publishing has been added to this list.
View all posts by colonialist →
This entry was posted in Africa, Grandchildren, Theatre, Theatre Review and tagged Colonialist, Panto Review, Sleeping Beauty at Sneddon in Durban.. Bookmark the permalink.