To say someone had ‘bought the farm’ or ‘bought the plot’ or simply ‘bought it’ has had morbid connotations, for airmen in particular, since World War 1. It meant dying as a result of a crash or of being shot down. Many explanations for the term exist, including that compensation to a farmer whose land had been crashed into, or insurance following death of a farmer’s son, would enable the farm mortgage to be paid off. Or, perhaps, that it was a permanent retirement from flying such as would occur if, after leaving the service, a man had bought a farm. More likely is that it originally referred to the burial plot, and other refinements in understanding crept in later. World War I slang used ‘become a landowner’, and some earlier similar references go back to the 1800s.

Anyway, the farm we have just bought at Shongweni Farmers Market does not fall into those categories. Nor does it consist of land where crops grow such as our pictured purchase of pawpaws, as we call them, although they are a different species to the N American pawpaw Asimina triloba. They are Carica papaya, of Mexican and parts of S American origin, so perhaps should be known by us as papayas. What’s in a name? A papaya by any other name would taste as sweet.

No, the farm we wormed our way into buying, together with livestock, is one we put in the back of the car and brought home with us. Part of Sunday was spent in setting it up.

Yes, we are now into vermiculture! 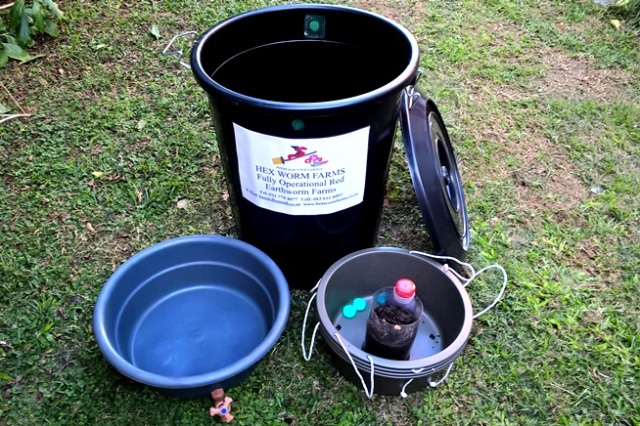 Actually, the vermiculture stage will last for about six months while we build up our ‘herd’, after which the primary aim is vermicomposting. Our garden will have a rich source of compost and worm tea for the plants to thrive on. No pictures of the actual Eisenia worms appear because, by the time I had deployed my camera, every red wiggly had wriggled completely out of sight.

Active septic geranium who plays with words writing fantasy novels and professionally editing, with notes writing classical music, and with riding a mountain bike, horses and dinghies. Recently Indie Publishing has been added to this list.
View all posts by colonialist →
This entry was posted in Africa, DIY, Gardens and tagged Colonialist, Pawpaws versus papayas, Vermicomposting, Vermiculture, Worm farm. Bookmark the permalink.

15 Responses to Buying a Farm