Another independent bookshop comes to The End —

— and the cups will run dry.

In 2009, a young girl named Kerry returned to Amanzimtoti from Cape Town, where she had first been employed, filled with experiences of boutique bookshops found in that area and determined to start one of her own. With the help of her parents and her own entrepreneurial skills the dream was realised as ‘The Book Boutique’, which became a thriving business combining excellent selections of books with fine coffee and cakes.

Book launches and Saturday readings of books to children became regular features.  At one of the former, some five years ago, I met ‘Spud’ author John van de Ruit. He was fresh from the success of the movie made from the first book, and with great tales to tell about interactions with John Cleese. I bought his latest Spud book ‘Exit, Pursued by a Bear’, which he autographed for me.

Anyway, this month came the shock announcement that on 24th July The Book Boutique will close down. Kerry is bitterly disappointed at needing to move on, but as she says, ‘… also a business decision in terms of the financial feasibility of an independently owned bookstore in the current economic and technology driven environment.’ (By the same token, it is becoming increasingly difficult for authors such as myself, published by small ‘indies’, to find outlets. The chains are generally serviced by agents who are notoriously inaccessible.)

It is sad indeed that, as with the era of the family grocer, baker, butcher and clothing stores, one finds that the age of neighbourhood bookshops is also gone, replaced by impersonal warehouses run by chains in shopping malls. I remain unconvinced that the economies of scale widely accepted as reasons for this revolution are truly justified on macroeconomic and cultural analyses. So many inefficiencies come about in time and travel and expenses involved in the construction and running of the mall monstrosities, and the personal touch is all but lost. Not to mention their ecological impact. 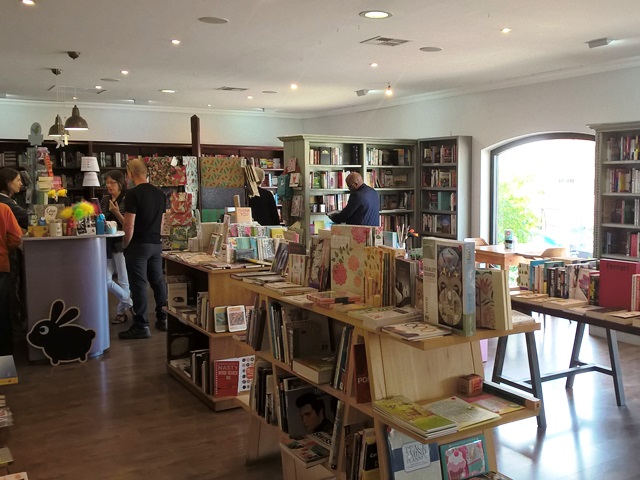 The charm of bookshops like this one was again brought home to us when we recently attended another book launch, when I took the pictures and about which another post is forthcoming.

Active septic geranium who plays with words writing fantasy novels and professionally editing, with notes writing classical music, and with riding a mountain bike, horses and dinghies. Recently Indie Publishing has been added to this list.
View all posts by colonialist →
This entry was posted in Africa, Books, Colonialist, Writing and tagged Coffee and Print, Colonialist, Independent Bookstores Closing, The Book Boutique Amanzimtoti. Bookmark the permalink.

45 Responses to Another independent bookshop comes to The End —