RIP Blog (not quite), a Cicada (completely), but bringing Mr Bean alive.

Posted on November 6, 2017 by colonialist

Many bloggers suffer under the misapprehension that it will be noticed if there is an abrupt hiatus in their posting, and that people will rush around like headless chickens wondering where they have got to. The reality is that nobody is likely to notice for some time — if at all. Nevertheless, there is this compulsion to offer apologies and excuses …

Mine are simply that I have been unprecedentedly busy, with the Garden of the Year judging, and upcoming prizegiving in a week’s time for which I have yet to write my speech, various edits, researching my new textbook and composing music for it, plus trying to patch up things damaged in our breezy and drizzly weather (that is using the famous British understatement bit). I have accumulated oodles of post-worthy tales and pictures, but with no time to feature them they have become old news and will remain in obscurity.

Yet another vista from Royal Natal Yacht Club, which we are likely to visit even more frequently from now on. Our favorite place to eat out, with the best pizzas in the world, got wiped out so badly in the bad weather that the owners are unlikely to want to try to revive it. 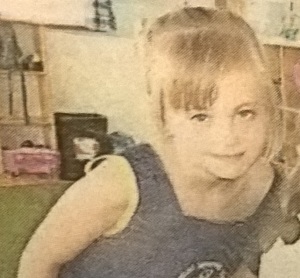 This picture is of six-year-old J featuring in our local newspaper yet again. I don’t know how she does it. The paper serves a large area with many dozens of schools and such, and numerous things going on, and only has limited space for the social/school/sporting stuff, but she somehow sneaks in again and again, if not on her own then (as with this party) as part of a group. This must make her third or fourth time this year alone.

I was amazed at this picture by J of Rowan Atkinson (Mr Bean on television in a real-life and in an animated version). Simply by watching it on television, and unaided in any way, she came up with this caricature showing mole on cheek and all. That of ‘Teddy’ is also really good. I thought, when I saw it, that her elder sister had drawn it, and even then I was impressed.

I found her sitting bent right over in our courtyard and sobbing her little heart out a couple of days ago. When I went to give her a hug and ask what was wrong, she showed me a cicada she had rescued from one of the cats and now had cuddled in her hands. It had died, and she was heartbroken. What a little darling!

Active septic geranium who plays with words writing fantasy novels and professionally editing, with notes writing classical music, and with riding a mountain bike, horses and dinghies. Recently Indie Publishing has been added to this list.
View all posts by colonialist →
This entry was posted in Grandchildren, Personal Journal and tagged Colonialist, Mr Bean, RNYC, Tender-hearted.. Bookmark the permalink.

17 Responses to RIP Blog (not quite), a Cicada (completely), but bringing Mr Bean alive.