For you, Senorita, I weel …

We keep (too many) rescue cats. We feed and encourage birds. There is a conflict, there, and inevitably the cats will nab one. Particularly with chicks, where the warning systems we have fitted to all cats will not be enough.

The other day yells from Much Better Half alerted me to the fact that Pearl had scored. I dashed out to see her crossing the cottage lawn, bird in mouth. As soon as she saw me she zoomed up the wall to the lawn on the next level, with me dashing round to try and catch up with her. Fortunately at that juncture Amber intercepted her and they started a discussion on ownership. Pearl opened her mouth to make a point and the pathetic little bundle of feathers fell and simply lay there.

I seized opportunity … and the chick … snatching it from under their noses. The looks I got from both felines should have shrivelled me in my tracks.

Anyway, I found a shoe-box and placed the bird in it to recover from the shock, at least, before I inspected for damage and while I found and cleaned our cage kept for such events. In due course the bird was in the cage and had recovered enough to sit on my finger while I looked it over. I decided it was nearly at nest-leaving stage, and wondered what it fed on. Amazingly, it seemed completely uninjured. Pearl had been carefully preserving it for an hour or so of entertainment.

Who or what are you? 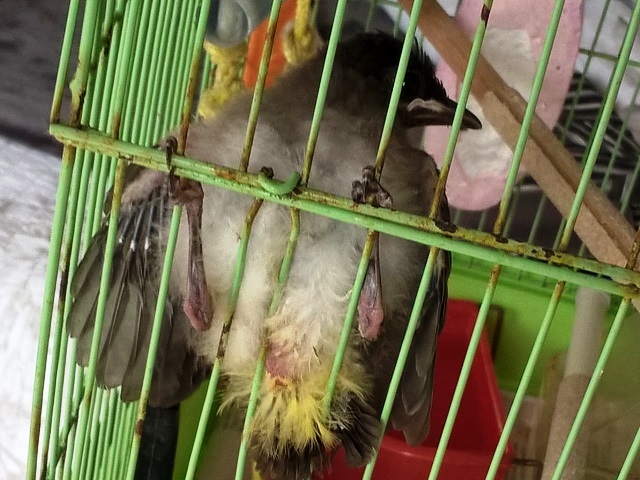 I was trying to identify it (juveniles are difficult) and had abandoned bird books in favour of looking up the number of Centre for Rehabilitation of Wildlife (C.R.O.W.) when baby found his voice and solved the problem for me.  ‘Mommy! Daddy!’ he shouted in shrill trills, and kept it up insistently.

Next moment Younger Daughter reported that the parents were responding, and trying to get into the house to join their offspring. They were definitely bulbuls, which would have solved the problem had we needed to do any feeding, but I resolved to test the mobility of the bird first. YD jumped the gun, to my slight annoyance. She put it into a tree instead of on the lawn (for me to take pictures if it could fly or recapture if it couldn’t). Baby kept up calls and parents were swooping around with agitated cries throughout the operation. It was all quite a frantic scene.

Anyway,  baby headed into the tree very briskly, and my attempts to record the departure and the welcome from Mom (or Dad) were limited to this glimpse of parent on left and baby on right.

I think I can in days since recognise the youngster as being one back near the cottage lawn that takes off at speed at the very inkling of a tinkling of a kitty-bell.

Active septic geranium who plays with words writing fantasy novels and professionally editing, with notes writing classical music, and with riding a mountain bike, horses and dinghies. Recently Indie Publishing has been added to this list.
View all posts by colonialist →
This entry was posted in Africa, Birds, Cats, Personal Journal and tagged bird caught by cat, bird rescue, bulbul chick escape., Colonialist. Bookmark the permalink.