Six-year-old J granddaughter J is ridiculously fond of being in water and just lately has taken this passion to extremes. After finding herself in the Swimming Squad within days of starting ‘proper’ school, she has been taking lessons twice a week and swimming in Squad training sessions on the days in between. She was also picked to swim for her school in a recent friendly gala against Durban’s ‘top’ schools, where relays only were swum so it is hard to measure individual achievement. Her school didn’t shape too well. Still, the fact that she was chosen to represent her age group in the ladder relay on top of doing freestyle and breaststroke says something.

On the way home from this tiring gala it was mentioned jokingly that she would just have time to be dropped off at her lesson en route. To general consternation, she opted to have this done, and performed well in her swimming school session as well. She has been going from Squad to lessons quite happily, but this seemed a bit much! With all this solar exposure she is, in spite of liberal applications of suncream, becoming bronzed.

The Junior School’s Top Eight Gala was scheduled for the evening of 13th so it was assumed that no Squad training would happen for R or for J. Horrors — it transpired that it was happening for both. I had to rush R’s kit in. J already had hers from PT. So I watched the training, brought them home, went out to pick up a repaired mircrowave, and then it was back to school for the Gala. 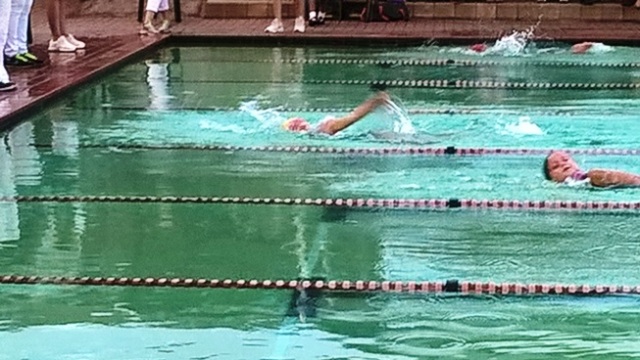 In freestyle, the 3rd race of the day, J was pipped to a very close 3rd in spite of wrapping her goggles round her neck on the dive, and we were thrilled.

She was only entered in one other race, the breaststroke, and in that she bobbed her way furiously to a close 2nd! We were extra thrilled. 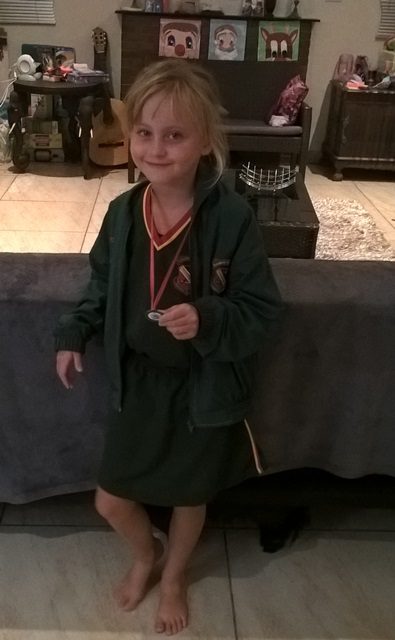 Our thrills overfloweth, though, when it came to medals and it transpired that those two places on points had given her an overall 3rd in her age group and thus a bronze medal!