Large above-ground pools have a good lifespan on the vinyl liner. But for homes right on the sea one cannot say the same for the metal supports. It has taken from 22nd December 2014 until now for some of those in our pool to rust through completely. Seeing them on their way out, we began to explore how to buy spares, but before this had been developed we saw the same pool advertised for a really good price so decided to buy a whole new one for spares.  The liner is still holding up, so it was only the metal bits that need replacement now. For replacing the liner, there will be no alternative but to drain the pool, of course, but now that we are out of our rainy season I really didn’t want to take any water out to do the repair. I wondered if it were possible to do this without loss of water, particularly as the level is currently lower than we would like, and decided to ‘give it a go’.

It wasn’t easy, with learning by trial and error, but finally the objective was met! Here are some tips for anyone who needs to go through the same, or a similar, process.

Start with a section where the horizontal pipe is completely severed, or saw through the final part if necessary. Hammer the securing pins up from the bottom to release, and remove them.  Unclip from upright, by freeing up base of upright and tilting as needed.

Use a pipe or dowel of the size shown to insert in the gap at the bottom of the horizontal pipe, and by rolling it upwards and around loosen where the pipe has adhered to the vinyl. Remove and replace pipe with a new one. Also replace the ‘T’ piece if necessary.

Have the spare parts handy, and a hammer to persuade stubborn sections to loosen. Also have a piece of wood to hold against the pipe and be hit upon, to avoid damage to the pipes. Note the state of the first section of pipe removed, shown on the left.

Starting from the section worked upon, it is now relatively easy to seek out and replace further damaged sections like this one. 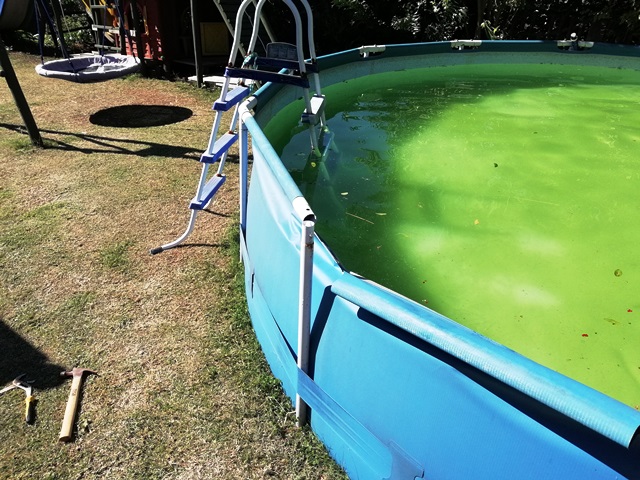 After removing the parts needing replacement, and propping up or temporarily replacing to avoid collapse, insert the good pipes into the vinyl ‘tube’ then push at a slight angle into the end of the ‘T’ piece by slanting the pole as necessary. Some strength is needed to get it far up enough to go in, amd tapping the other side with the hammer against a wooden buffer may be necessary to seat it.

When all replacements have been made, the upright pole must come out for the last join. This is effected by using two levers (I used spades inserted from the handle side) to force the vinyl to stretch outwards until one can start sliding the final part into the ‘T’. Once this is done, a hole is made in the ground sufficient for the pole to go low enough to clip in at the bottom. The ‘T’ piece is then propped up, the pole lifted to clip into it, and a support placed underneath to keep the pole at that height.

And there you have it: replaced supports without draining.

Active septic geranium who plays with words writing fantasy novels and professionally editing, with notes writing classical music, and with riding a mountain bike, horses and dinghies. Recently Indie Publishing has been added to this list.
View all posts by colonialist →
This entry was posted in DIY and tagged Above ground pool repairs, Colonialist, Portapool rusted supports, Portapool supports replacement, Repair portapool without losing water, replacing portapool poles without draining. Bookmark the permalink.