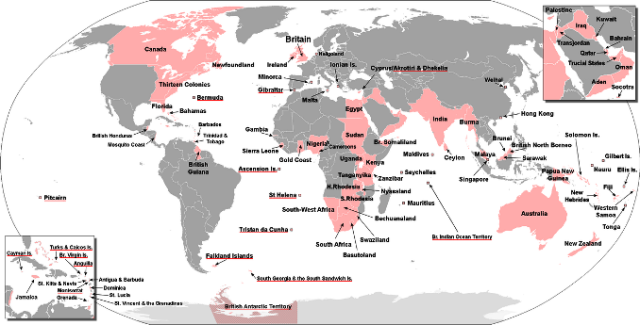 The British Empire — Colonialism on a Grand Scale and a Fact of History.

The latest Public Protector in South Africa, already discredited like her predecessors, is Mkhwebane Busisiwe. She is maintaining the sad tradition of ridiculous populist statements to take attention away from her own ineptitude and/or bias. This is a tried and trusted Zuma tactic, by the way.  It works on the same principle as when a lizard being attacked by a predator detaches its tail to wriggle furiously and attract attention, while the actual lizard (or issue) sneaks off.

She furiously attacks things that are none of her business, neglects those that should be priorities, and is once again flogging the rotting carcase of the ‘Colonialists brought no benefits’ idiocy as so infamously picked up by Maimane of the Democratic Party following Helen Zille’s factually unchallengeable pronouncement that ‘for those claiming the legacy of colonialism was only negative, think of our independent judiciary, transport infrastructure, piped water, etc’.

Busisiwe’s comments that the tweet ‘has brought back a lot of pain and suffering to victims of apartheid and colonialism in South Africa’ and that ‘she (Zille) celebrated the oppression, exploitation, racism and poverty that are the direct results of the legacy of colonialism’ are ludicrous in the extreme. It would take people hyper-sensitive and mentally deficient to react to the tweet in this manner … in fact, perhaps that is the crux of the matter?

Zille’s biggest mistake was her apology, although that was worded as regret that what she had tweeted was seen as insensitive. When pressed on whether she still felt that good had come from the system she went on to clarify that there was nothing good to be said about Colonialism. This, too, is manifestly absurd. It was, as with all conquests and occupations in history, the only pragmatic way in which the culture, knowledge and expertise, that had provided the colonists’ superiority in the first place, could be shared. Sharing has always happened, no matter how much the oppressing class or nation has tried to suppress this.

Throughout the period of colonialism there were constant factors that improved the lot of all citizens in the longer term (until they sometimes got mucked up again by premature transfer of control), going side-by-side with the shorter-term atrocities and iniquities. Nobody denies the latter; it is foolish to turn a blind eye on the former.

Active septic geranium who plays with words writing fantasy novels and professionally editing, with notes writing classical music, and with riding a mountain bike, horses and dinghies. Recently Indie Publishing has been added to this list.
View all posts by colonialist →
This entry was posted in Africa, Current Affairs and tagged Colonial benefits, Colonialist, Helen Zille, Maimane, Mkhwebane Busisiwe, Zille. Bookmark the permalink.

10 Responses to Colonialism Benefit Denial Yet Another Lizard’s Tail?