Like us, the entire Pooch Pack are feeling the effects of passing years. All of the dogs have been with us for over twelve years. Annie the Africanis now moves with difficulty, the two Maltese, Gemma and Ni(gel), are not as spry as they used to be, Toby the Border Collie is a bit lopsided from a stroke, and his sister Tess has been wasting away to skin and bone in spite of being hand-fed and given all suitable medication.

Yesterday I assessed her. I have had to lift and carry her outside to perform, she could barely stand, and she was spending her days simply lying around. Lately she had even given up trying to move between house and cottage. Most significant to me was the fact that this happy, friendly dog was no longer a tail-wagger.  Not even a twitch.

I took her to the vet in the afternoon and she agreed that the time had come. Organs were shutting down, and Tess would simply suffer increasing discomfort from now on.

I stayed alone with her and stroked her and talked to her until that lovely gentle spirit had left.

This is a time when I remember the advice given by a vet in my own Tabika novel: that when one loses an animal friend one should not dwell on the sadness of their leaving, but rather recall the joy they gave during their lives. 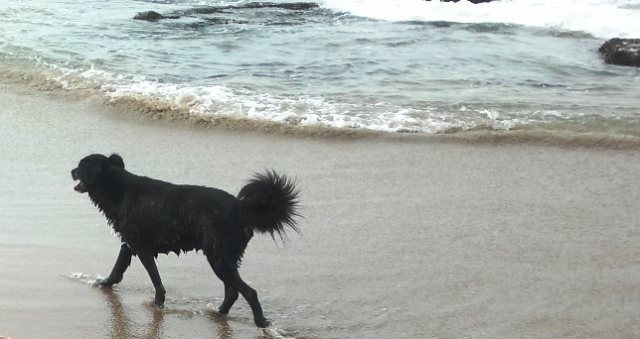 I was upstaged a bit with the humorous poem I had in the paper the day before yesterday. Immediately following it, a local resident, Eric Hodgson, had contributed the following (some modified slightly by me):

The meaning of opaque is unclear.
Ate a clock was time consuming.
I’m reading a book about anti-gravity. I can’t put it down.
The article about Japanese sword fighters is long, but I can Samurais it for you.
It’s not that he couldn’t juggle: he just didn’t have the balls for it.
So what if I don’t know the meaning of ‘apocalypse’? It’s not the end of the world.
When I held the door open for a clown, I thought it was a nice jester.

(Some of my own in this vein –  I avoided throwing in one about a jugular!):
Arrival is someone who comes to regard you as competition.
Cops need to know the difference between arrest and asleep.
One good tern deserves another, or they can’t breed.
A simile is a metaphor you like.
A pro can become a con if caught.

Which ones tickle your funny-bone most?

Active septic geranium who plays with words writing fantasy novels and professionally editing, with notes writing classical music, and with riding a mountain bike, horses and dinghies. Recently Indie Publishing has been added to this list.
View all posts by colonialist →
This entry was posted in Africa, Dogs, Humour, Wordplay and tagged Colonialist, Loss of dog, Pets dying, sadness, wordplay.. Bookmark the permalink.