Not that the naked eye can make out such detail in what appears smaller than a flea! 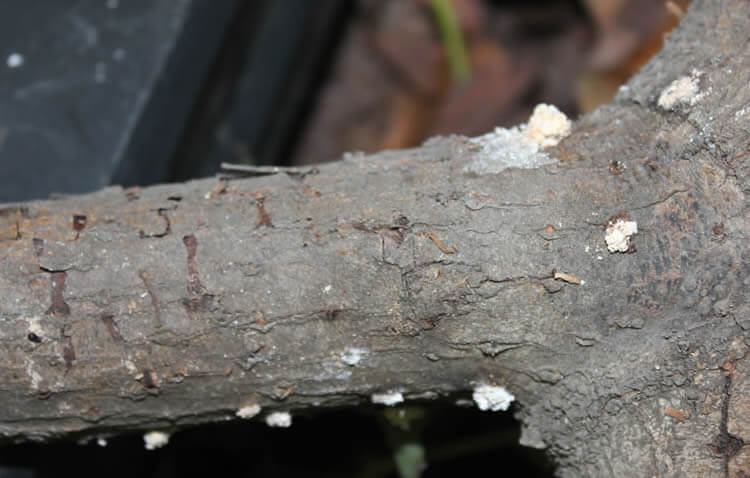 Sugar volcanoes and fungus. No bleeding wax shown, but that is obvious enough when seen.

Passage seen in a cross-section. These also typically take the form of a Y or a trident.

Today we attended a talk given by Johan Bodenstein, an esteemed local environmentalist, on the menace increasingly posed by the Polyphagus Shot Hole Borer Beetle. It is rampant in Johannesburg, which may soon cease being the biggest urban forest in the world if the depredations continue. Now, it is becoming increasingly evident in other widespread parts of South Africa, including Durban. With no effort at all Johan was able to show us infected trees in the Durban Botanic Gardens, where our meeting was held.

These tiny beetles, with holes the size of a pencil lead, are able to take out trees three hundred years or more old. Ominous signs are when top foliage starts wilting. Then one looks for the evidence of what really causes the damage — a white fungus created by the beetles — appearing at the black patches where holes are to be found, often under loose bark. Fallen sticks when broken open often reveal typical black Y or trident indications. Sugar volcanoes or oozing resin are another indication.

The beetles seem to have had their origins in Vietnam where wide-scale deforestation has been caused.

No easy solution is to be found at present, despite the claims of various concerns on the bandwagon of making quick bucks. The only sure way is to take infected trees out entirely, and burn them as close to the site as possible. When they are transported to other sites for burning, the beetles sprinkle happily along the way.

A method being experimented with is to put infected wood in large solar ovens where temperatures of over 70 degrees eradicate even deep-seated beetles, leaving usable wood and without the fumes and pollution caused by burning.

What is imperative is much more highly urgent research, and awareness on the part of the general public in reporting new occurrences will help in this. Everyone including children and the still functional elderly should acquaint themselves with symptoms of these threats to the environment, and act as watchdogs. A google search will quickly tell what the most effective reporting system will by for areas worldwide when symptoms are spotted.

Interestingly, lychee trees seem to be immune. In thanking the speaker I expressed a wish that we could have a tree-whisperer to extract their secret!