We were lucky enough to be able to attend a premiere of the South African (Kickstart/Toerien) production of this classic ‘black comedy’ – for want of any better way to describe it, for it is far more than that.  It had its birth in the dream of an American, William Rose, who had married an English girl and settled in England after WW2.

Yes, Rose maintained that the whole thing had come to him cut and dried in his sleep.

He and celebrated film director Alexander MacKendric (also born in America), worked it up into the Ealing Studios film of 1955 which featured Alec Guinness, Cecil Parker, Danny Green, Frankie Howard, Herbert Lom, Jack Warner, Katie Johnson and Peter Sellers.  The film won a BAFTA Award for Best British Screenplay and gained two Academy Award nominations.  Katie Johnson won the BAFTA for best actress. Total Film magazine readers voted it the 36th greatest comedy film of all time in 2000, and in 2010 the Guardian had it as the 5th greatest comedy of all time.

It was adapted for radio in 1996, then in 2004 there was a Hollywood remake starring Tom Hanks, and finally in 2011 Graham Linehan adapted it as a play.  This opened in Liverpool before transferring to the Gielgud Theatre in London.

The set shows a very wonky house perched on top of the entrance to a railway tunnel. (I saw parts of this in the building stages, and it is a real marvel.) Little-old-lady owner Mrs Wilberforce is persuaded by smooth-talking ‘Professor’ Marcus to rent an upstairs room to him for rehearsals of his ‘string quintet’. (As an aside, I noted Marcus was conducting, thus leaving it as a quartet.)  He and his gang actually want to use it as a base for an ambitious robbery.

One of the first big laughs comes when the ‘Professor’ has stated they are looking for somewhere quiet for their music, and at that moment deafening sounds are heard as a train passes through the tunnel.  The entire ‘house’ shakes – as does the theatre! – and the audience is deafened.  As the cacophony dies down, he announces, ‘I’ll take it!’

During robbery planning sessions Marcus plays, on a gramophone,  Minuet (3rd movement) from String Quintet in E, Op. 11 No. 5, by Boccherini, to the enchantment of Mrs W.  This gives the basis for a hilarious part when they are trapped into giving an actual recital to her and a number of her ‘club’ members, and have to muddle their way through by pretending to play a very ‘modern’ piece.

The show is a riot of slapstick, clever lines, excitement, and then lots of murder.  So as not to provide ‘spoilers’ to those who are going to be able to see the Durban production or the ones in other centres of South Africa, I won’t give away any more of the plot.

Suffice it to say that in spite of a fairly predictable ending one comes away with feelings of highly amused satisfaction, which evolve into amazement as one recalls how much widespread action was conveyed in such an intimate theatre setting.

The acting was all of a high standard making it hard to single anyone out for particular praise, and the critical timing essential for several of the scenes was wonderfully done.  I foresee that this is a production which is going to earn high acclaim, and I can heartily recommend it to all those geographically advantaged enough to get to a performance. 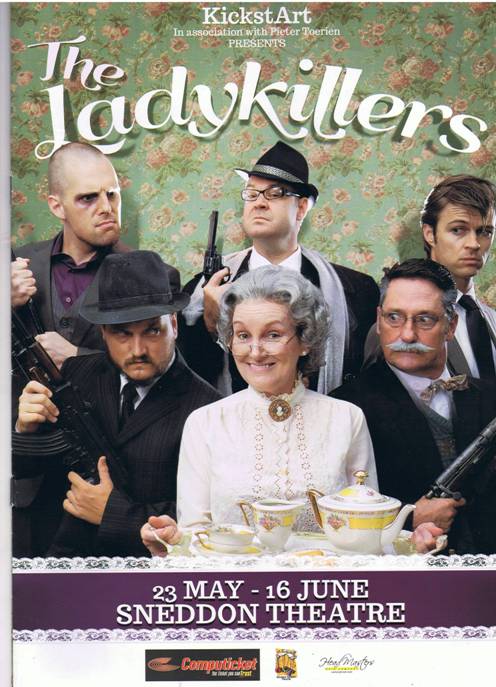 Active septic geranium who plays with words writing fantasy novels and professionally editing, with notes writing classical music, and with riding a mountain bike, horses and dinghies. Recently Indie Publishing has been added to this list.
View all posts by colonialist →
This entry was posted in History, Theatre and tagged black comedy, Classic 1955 film, Colonialist, Durban play premiere., play review: The Ladykillers, robbery murder and music. Bookmark the permalink.

15 Responses to The Ladykillers (Play Review)