Today an article appears in The Telegraph which equates campaigning against ritual slaughter with being racist.  The writer should come to South Africa and join the pathetic group who claim that every ill is a ‘Legacy of Apartheid’ even when the evidence shows that it is a legacy of their own stupid actions.  The logic amounts to the same.

The stance being adopted is clear from  the outset, when those opposing the practices of ritual slaughter are termed ‘bunny-huggers’.  Not an unbiased start. 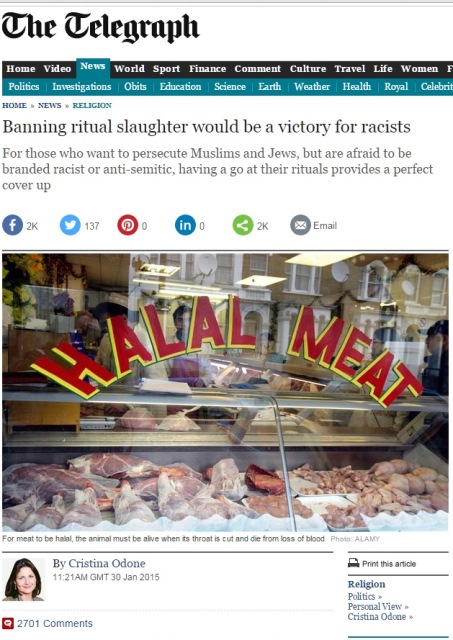 If you follow the link, you will see that the same writer argued, when John Blackwell on behalf of British Veterinarians called for a ban on ritual slaughter, that this would equate to valuing its cows more than its Jews.

In response to that, I would say rightly so, if those particular Jews persisted in a practice which is repugnant.  They are devaluing themselves.  It is not a racist thing at all.  One supports such a ban from the same standpoint as opposing bullfighting, trophy hunting, foxhunting, dogfighting, and all similar practices which some sick human beings regard as sport or entertainment.

Ritual slaughter or sacrifice customs are found in the writings and practices of cults and religions throughout the world. They are rooted in the belief that killing something in a certain ritual way is going to invoke power or please the creator, some deity, or some supernatural being.

If one applies the slightest logic to such a premise, the only conclusion to be reached is that it is the product of the primitive and sick minds of people who have come to revere or pander to something utterly revolting and despicable.

Yes, any creator which would require that lives be taken by making a game or spectacle or ceremony of it, thus brutalizing the young and society as a whole, would be behaving in a way utterly contrary to what one would reasonably expect from a higher being. Such ‘It’ (which does not qualify for the term ‘god’) would be worthy only of disgust. So, also, become the people blindly following such customs. Islam and followers of the Old Testament god blindly maintain that it is required and justified in scripture, which is infallible. As can readily be proved beyond any doubt, scriptures are flawed throughout. Far more convincing fantasies appear on the fiction shelves than some of the self-contradictory fables regarded as true in bygone eras. Thus, there can be no justification for adhering to those parts of these writings which are clear absurdities, such as the story that Abraham found divine favour for being willing to kill his own son to honour this petty tyrant of a god.

Creationists need to reconcile the anomaly of some ‘Thing’, having made something, then taking amusement out of some other things It has created destroying this particular one of Its creations. Those who believe that some power is looking down approvingly, saying, ‘Ooh, thanks for killing something to show you know I’m here. I’m going to reward you for being so brutally thoughtful,’ are superstitious idiots. So are those who believe that the death will release power which somehow accrues to them.

The sensible course of action for all authorities worldwide is to outlaw these barbarities, completely and without exception. It is high time that sanity should forcibly overrule ’religion’, ‘culture’, ‘custom’, and ‘tradition’ where these impose undue suffering or risk, or degrade any sector of the community.

50 Responses to Ritual Slaughter and Racism