Durban has a Smoking Problem …

A warehouse in the valley over the two parallel hills most of Durban’s Bluff comprises got all fired up with enthusiasm.  The pall of smoke was most impressive even from home, so after picking youngest granddaughter up from school we nipped to the top of hill number two to find a vantage point.  This is what we saw: 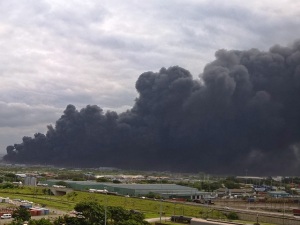 The smoke was visible from home; here is a sight of it some seven kilometers away over the roof of our parked car: 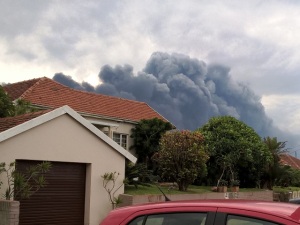 I was looking to see my way clear straight after that with a view to meeting an appointment with our opthalmologist the other end of town and on the far side of the fire.  In spite of deep forebodings from Much Better Half we set off, and passed only a few hundred metres from some of the fires. Unfortunately the leaping flames would vanish every time I clicked the camera: 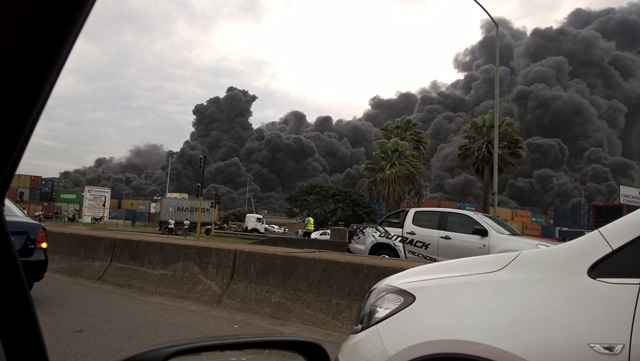 The sign to the left here was left by a would-be thatcher.  Rather an unfortunate backdrop for his advertisement!

Various roads were closed, but by sticking to a Berea route, we managed to avoid getting under the influence of the nasty-smelling smoke.  From slight acrid whiffs we had, I’d have been apalled to have been in a pall of it.

At the opthal-wotsit, we met good friends we haven’t seen for some time.  Then I had the good and the bad news.  Glaucoma is being controlled so that I have figures comfortably under the average. I have 20/20 vision, even without spectacles.  The bad was that there are traces of cataract cells trying to make a comeback after the lens replacements I had a number of years ago, causing a ‘dirty window’ effect in my right eye, so I’ll have to get that sorted by laser on 4th April.

Active septic geranium who plays with words writing fantasy novels and professionally editing, with notes writing classical music, and with riding a mountain bike, horses and dinghies. Recently Indie Publishing has been added to this list.
View all posts by colonialist →
This entry was posted in Africa, Current Affairs, journal., Photography, Wordplay. Bookmark the permalink.

15 Responses to Durban has a Smoking Problem …