Writing and a Ball Pen

Over the past couple of weeks, when I haven’t been conveying kids to swimming, netball and such things,  I have been very involved with writing — someone else’s. My novel way of earning a living has had me glued to the computer, but trying to avoid the temptations of social media or entertainment while shaping up a manuscript of a devilish fantasy for submission to an interested agent who provided the introduction. The writer is talented, qualified, and experienced, but I think both of us have been surprised at the number of issues which arose nevertheless. One often reads into one’s own work what one’s imagination is expecting to see, which doesn’t always tally with what is actually on paper.

I enjoyed the ‘away’ netball matches below, featuring young (now 9) J near the centre. She certainly gets around. She would throw a ball from one end of the field, and then somehow teleport herself to the other side of it to catch the next throw. or so it seemed.

Not that this field is in a pen, but the ones at her own school are.

Anyway, let me read turn to the manuscript … 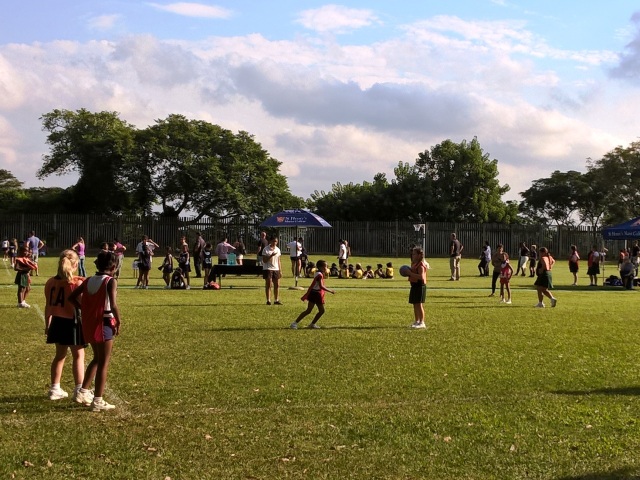 Active septic geranium who plays with words writing fantasy novels and professionally editing, with notes writing classical music, and with riding a mountain bike, horses and dinghies. Recently Indie Publishing has been added to this list.
View all posts by colonialist →
This entry was posted in Africa, Editing, Grandchildren, Personal Journal and tagged Colonialist, novel editing, school netball. Bookmark the permalink.

9 Responses to Writing and a Ball Pen